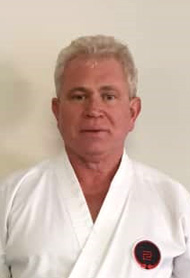 Goju-Ryu started in 1978 in Namibia with Henry de Vries as the chief instructor and approximately five to 10 students, Carl van der Merwe being one of them. In 1999, Carl became Chief Instructor of Okinawa Goju-Ryu Karate Namibia and has grown the organization to currently having more than 200 students spread across 3 dojos. In 2016 Sensei Carl successfully graded for his 7th Dan in Okinawa, Japan; placing him amongst the highest ranked IOGKF practitioners on the continent.

As an accountant/business owner by day and karate instructor by night; Sensei Carl van der Merwe has been diligently practicing karate for more than 30 years now and continues to inspire his students through his hard work, dedication and an undeniable passion for Goju-Ryu. 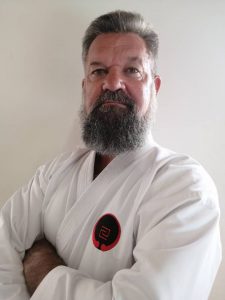 The Walvis Bay club was initially started by Sensei Carl van der Merwe in the garage at his home in Windhoek in 1991. At the time he had only two students – Nico and Riaan Maritz. They trained together before all moving to the coast. As more members joined the club it later moved to the Walvis Bay Private High School PE hall  for almost 20 years and now has its own premises in Meersig.

Today the club is run by Sensei Nico Maritz and his wife Bärbel. 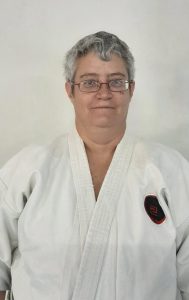 Having started karate in 1982 under Sensei Hennie de Vries, Sensei Marion Bause has been a corner stone of Okinawa Goju-Ryu Karate Namibia for almost 40 years. Sensei Marion has always had a strong passion for teaching and through the years has helped many of her students achieve black belt status; most notably Sensei Sam Ekandjo.

Sensei Marion remains one of OGKN’s most senior and respected karateka and her rank as 5th Dan makes her one of only three women in the country to have obtained such a prestigious level. 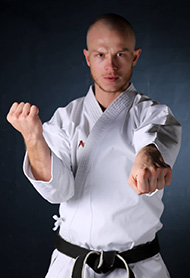 Sensei Stefan van der Merwe started karate in 1996 in Walvis Bay dojo under the guidance of his father, Sensei Carl van der Merwe. In 2006, Sensei Stefan graded for his Junior Shodan and two years later at age 17 he successfully passed his Senior Shodan under Sensei Bakkies Laubscher, making him the youngest Senior Shodan in OGKN history. Whilst taking a short hiatus from Karate between 2012 and 2015, Sensei Stefan received his degrees in sports science and biokinetics at the University of Stellenbosch before returning to Namibia.

Since his return, Sensei Stefan has been actively involved in Namibian Karate; both as an instructor, coach and national level competitor. Most notably in 2018 Sensei Stefan won Bronze for Kumite at the Commonwealth Karate Championship and in 2019 he represented Namibia at the 12th African Games in Rabat, Morocco.

Sensei Stefan’s primary motivation has always been his father and he hopes to one day follow in his footsteps as Chief Instructor of OGKN. 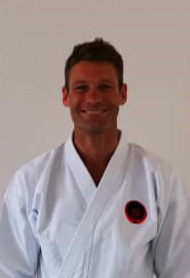 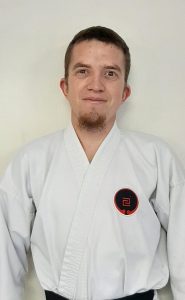 Most recently Sensei René participated in the 2019 IOGKF International Gishiki in Okinawa, Japan and upon returning to Namibia he successfully graded for his 3rd Dan. 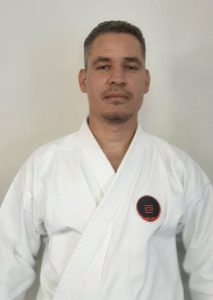 Senpai Pablo was born in Lubango, in the south of Angola and has been in Namibia since 2001. After marrying the Namibian Woman of his dreams in 2006, Senpai Pablo pursued various carriers in catering and hospitality before starting his own shuttle and translation business, mainly for the Portuguese community. Senpai Pablo started karate for the first time in 2013 at OGKN. Senpai Pablo has since participated in the 2015 African Goju-Ryu Karate Championships in South Africa where he receive a gold medal for kata and bronze for kumite.

Currently more active than ever, Senpai Pablo has taken on the role of senior instructor and is due to grade for his 2nd Dan later this year.